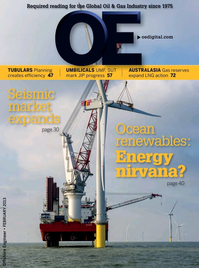 The challenges of managing big data

Managing access to crucial data while maintaining a secure environment in the offshore communications sector can be taxing for many operators. Whether the information is moving from rig to shore, to the seabed, or to the drilling equipment, offshore communication has a host of inherent issues. Jennifer Leahy explores issues and innovations discussed at OilComm 2012.

The US, for the first time, is close to being independent on itself for oil and gas, notes J Michael Kuykendall, VP for global information technology at Apache. “Our technology is what is driving us there, the pressure being put more now on the communications and infrastructure that is required to make all of that happen.”

While technology provides advantages in the form of near-instant access to extensive information, such knowledge can be crippling if not properly distributed and protected. The most significant communication challenge, Kuykendall says, is to manage and merge the data into significant, useable data. He was recently on a rig and saw firsthand the data overload many operators face.

“They were pulling data from everything – anything that can be measured, in perpetual motion, received a pip tag. Millions and millions of rows of data were generated just from that one platform, coming into a server. I asked: ‘What are you going to do with that?’ And they said: ‘That’s what we are trying to figure out,’” he says. “We are just a mess right now trying to manage that big data.”

Everybody is “on that steep learning curve right now, trying to manage data distribution”, Kuykendall adds. “It all goes back to that 28 year-old on a pumper who wants to be sitting in his room, and be able to pull out his iPhone and have access to that one little piece of data, that is gleaned from the millions of rows, that he needs.”

Finding a means to turn data into meaningful information more quickly for the end user is a challenge that plagues offshore communications professionals. The answer often requires asking the right questions to determine what data is needed, when it is needed, and how the data will be used.

“It’s important to get on the frontlines. Don’t assume you think you know,” Kuykendall says. Many businesses are now taking more of a proactive, not a reactive approach to data management, he adds.

Additionally, 24/7 video feeds are often used offshore, both for monitoring equipment as well as teleconferencing. Such use can provide substantial savings but does add another challenge.

“The sixth generation rig is a software-driven rig. More often than not something software-driven will bring it to its knees, causing downtime,” notes Coy Wright, IT VP for Pacific Drilling. “We’ve taken the stance that IT is imperative, is critical, to avoid downtime.”

Touted by some as having the potential to change offshore communications, satellite’s Ka-band is one potential solution for companies facing bandwidth issues. Though all Ka systems are more susceptible to rain fade than high throughput Ku systems, experts suggest the additional frequency may provide added value to users.

“All bands have their place and the application environment tends to determine the appropriate band, rather than a fleet operator’s band of choice. It is all about the mission and the right solution for the mission profile. There will absolutely be mission profiles that need Ka, but it is not an automatic replacement,” says Keith Johnson, president of energy solutions for Harris CapRock.

“Unlike cellular technology, where 4G replaces 3G and everything else before it, Ka will join other frequency bands as a tool in building a communications solution. There are cost and service trade-offs to every band,” he adds.

Harris CapRock recently entered into a strategic marketing alliance focused on ultra high-speed, low latency E&P communications capabilities with O3b Energy. “O3b represents an interesting potential technology for our customers. It is unique in that it offers low latency exploration and production communications capabilities that no other planned Ka system is offering. For those clients that have assets operating within their coverage area, the low latency advantages represent an exciting new capability for some applications in the oilfield, including seismic vessels and other data hungry sites and could offer better remote decision making,” Johnson says.

The ‘need more bandwidth’ cry is nothing new for the industry, according to Shell field telecoms advisor Don Happel. “It’s been growing for the last 30 years, and the carriers have to continually upgrade and push their networks.”

Though some companies have opted to install efficient fiber network solutions offshore, such capital investments are cost prohibitive for many operations and applications. “The technology is there. We can have live feeds from the battlefields but it is not economical,” Wright says.

Shell opted to install fiber networks when rebuilding communication networks in the Gulf of Mexico in the aftermath of hurricanes Katrina and Rita. And Happel notes Shell has invested in subsea fiber in new deepwater developments where costs can be justified in relation to the overall project development costs.

Shell’s offshore microwave system was obliterated during the storms, says Rob Raleigh, subsea IM/IT manager – deepwater IM/IT – upstream Americas for Shell E&P. As such, the company started to look toward fiber as a potential strategic solution. Although fiber itself does not provide any benefit, it enables improvements to work processes and tools that can provide significant benefits, he notes.

In environments where communication options are less than optimal, companies must re-evaluate operations and tailor the data output to suit the available bandwidth.

“We struggle probably most notably with application performance over satellite networks. Even if the network is optimized, a lot of the applications the software providers are rolling out right now are not architected, and not coded, in a way that they perform well over high latency, low bandwidth environments. So we are looking at re-architecting our application platforms. There’s a lot of technology that we feel like we can’t look at. Based on experiences we have had, we feel it won’t work well,” says Rowan’s VP and chief information officer Lisa Gauthier.

While offshore data management may be considered a daunting task, the human element of communication applications is becoming increasingly demanding as companies work to attract and retain skilled personnel.

In addition to the communication needed for business operations, employees also now expect access to the internet and are increasingly likely to bring their own electronic devices – known as a ‘BYOD’ environment. Gauthier says that crew members have expectations and demand bandwidth while offshore. “They expect to be able to access social media, to watch the video from their child’s birthday party that they missed,” she says.

Providing such access creates a host of security issues, however. Employees may attempt to download illegal, copyrighted material, or otherwise compromise the network.

“Anything that touches the Shell [corporate] network has to follow our security procedures,” Happel says. “We have to provide a modicum of filtering to mitigate corporate responsibility.”

Shell uses a corporate network which has strict controls and filtering and offers wireless internet for employee and contractor. Initially, Happel says, Shell only provided protection on the wireless internet network from external denial of service attacks, but the company later found that it had to provide additional filtering and logging to prevent people from using bit torrent activity to potentially download copyrighted material. Published company policy also reinforces that such illicit activity is subject to reprimand up to and including dismissal, he adds.

Despite the increased availability of bandwidth, many companies still grapple with balancing business need for access with employee demands for online access. Some alter access availability based on time of day, opening the system for increased worker communications at the end of the work day and reserving the majority of bandwidth for business use during hours of operation.

“We prioritize data streams on networks. Someone doing crew e-mail is not going to get the best service as someone who is putting in a purchase request or addressing a drilling issue,” Wright says.

Unreliable or insufficient access for onsite personnel can cause major headaches for business operation and drain worker morale.

“There is inherent limitation of satellite networks. In IT we understand it. But business users don’t. Explaining that to the operations side is tough. When they’re out there and want to do what they need to do, they don’t care about that conversation. Their reality is that it is not working for them. They don’t care about latency statistics,” Gauthier says.

As a rule, the level of bureaucratic oversight is increasing globally, notes telecommunication attorney Christian Hyde, director at Hyde & Associates. “When you are using a transmitter you need a license – either the corporate user or operator. For VSATs, it’s most often the end user,” he notes.

Hyde recommends companies begin determining whether they need a license for offshore applications as soon as sites are identified because it can take up to six months to receive official approval in some areas of the world.

“There is no silver bullet. Don’t waste your time looking for it,” Hyde says.

Despite the breadth and scope of the technological improvements occurring in the offshore telecommunications sector, Shane Meche, telecommunications consultant for TEK systems and consulting full-time for a major oil company, predicts collaboration between IT and operations will be the most notable evolution as the industry looks forward.

“The work force is changing. We now have video feeds that work in a number of applications. We are dealing with better technology that will allow us to be smarter about how we do things, limit the amount of people onsite,” Meche says. “In the future the focus will shift to determining what is critical, what is not critical, and how to optimise how you operate within your parameters.” OE